The Hot Tamales of Avenue A 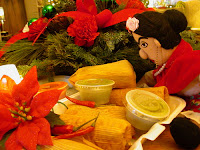 Having grown up in Texas, I am accustomed to the tradition of Mexican tamales at Christmas time. So I decided to walk out the front door of my building in Nueva York and search for some. Labor-intensive in their making, these pockets of masa, lard and meat (pork, chicken, beef, etc.), hidden in corn husks, are best served steaming hot and accompanied by red and green salsa. I could have traveled to many far-flung neighborhoods of the city in search of the great hot tamale, but I don't like tamales well enough for them to require multiple forms of transportation.

After some internet research, I headed out to the upper reaches of the East Village to Zaragosa, a Mexican deli (215 Avenue A, between E. 13th and E. 14th St.), and hoped they had some tamales. I didn't even call first. I needed the walk anyway, as I had veered out of dietary guidelines with respect to daily gingerbread consumption. And, yes, they had some tamales that day, but just of the chicken variety. After I sat down and tried one, I brought home ten more hot chicken tamales for the colonel and company. The home-made tamales at Zaragosa are large and caliente, especially with their home-made green and red sauces. The owners are from the large city of Puebla, the birthplace of mole poblano.

The round-trip walk from Washington Square Park (not pretty right now with all the construction) to Zaragosa is about 2.5 miles. Winding my way through the streets I thought that parts of the East Village were funky enough to stand in for my memory of South Austin.

Image: Frida and tamales from Zaragosa in the East Village, now at home in Greenwich Village. By the way, I recommend the cookbook, Frida's Fiestas: Recipes and Reminiscences of Life with Frida Kahlo by Marie Pierre Colle and Guadalupe Rivera (Clarkson Potter, 1994), if only for the photos of Frida and Diego's kitchen.