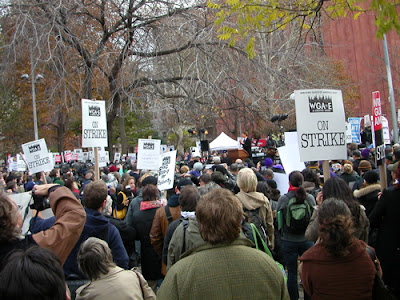 Members of the striking Writer's Guild of America, East rallied in solidarity with other unions today at noon in Washington Square Park. Speakers included labor union leaders, actors Danny Glover and Tim Robbins, NY Congressman Jerry Nadler, Daily Show correspondent Aasif Mandvi, and Senator John Edwards. The senator was the most well-dressed of the speakers, appearing in a handsome full length black coat. He scored some points with the crowd just by showing up, but he also drew applause when he said he would skip out on a scheduled televised Democratic Party debate in December should the workers from CBS stage a walkout. He also said he has canceled appearances on The View and Ellen in support of the current strike.

The speakers presented a coherent case on behalf of the strikers, arguing that the writers were not spoiled billionaires, as some would characterize them, but members of the middle class trying to stay that way.

The band that accompanied the rally played a nice rendition of Boz Skaggs's "Lowdown" at the outset to get everyone going.

Image: Presidential hopeful Sen. John Edwards (at the podium, if you can see him in this picture) addresses the crowd in Washington Square Park. November 27, 2007.