Walking Off the Wall Street Bears: Confessions of a New York Consumer 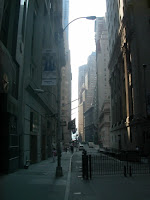 Consumer spending drives approximately two-thirds of the United States economy, so it follows that Wall Street will become nervous if people stop buying all the stuff they would like to have but don't need. Thus, a quote,

"The other big concern is where is the consumer. Starbucks released earnings, and they said they ratcheted down estimates because of the softening consumer market. That's what the market does not want to see." - Andre Bakhos, president of Princeton Financial Group quoted in a story by Reuters and published in the November 16, 2007 edition of the NYT.

I hate to say it, but the softening of the consumer market usually begins with me. As a New Yorker who wants to support the local economy, I often feel guilty that I do not shop enough, especially for clothes. I am not a fashion plate, content as I am to walk the streets in last year's Ralph Lauren jeans or an Ann Taylor suit or, more typically, several interchangeable immortal outfits from a decade ago. When I went out this morning in the cold New York rain, I put on a classic full-length raincoat, a red scarf and a cowboy hat, glanced at myself in the mirror, and started reciting lines from Deadwood.

My father and mother shaped my consumer habits early, but in often conflicting ways. When I asked for something new, my father would respond with his own question, "Do you want it or need it?," a sticky inquiry that stayed with me all my life. My mother, on the other hand, would answer this question by deciding that I needed whatever clothes looked adorable at Neiman-Marcus.

In the end, I did not become a prolific shopper. I ask first if I need it, and then when I do make a purchase, I buy something of quality that I think will take me through a recession.