Walking Off the Wall Street Bears: With George, and a Rally! 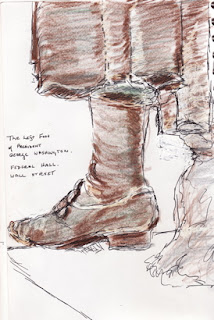 How spectacular Wall Street was this afternoon and prime for a little rally! I spent much of my time soaking in just a taste of afternoon sun that broke through the clouds, strolling up and down the short stretch of this expensive and historic real estate. Wall Street is cavernous and narrow, but the light that filters through on the east and west provides for some sexy lighting. Tiffany's has joined the street, very near a Starbucks, so there's much caffeinated glamour to take in.

I sat for awhile behind the statue of George Washington in front of Federal Hall and pondered his left foot. Across the street sits the House of Morgan, so it was the perfect place to contemplate the founding of the United States of America and the flourishing of the capitalist system. I reached no conclusions. I did venture into Federal Hall to look over the preview of the coming National Archives presence in the main exhibition halls, and I was excited to see many important documents of American history. Maybe if more people knew about this exhibit I would not be the only visitor. The gift shop is a good place to buy gifts relating to George Washington.

In financial news of the day, Wal-Mart reported surprisingly good earnings, largely due to its early discounts for the holidays. This great news rallied investors, cheered that consumers will buy enough merchandise for everyone throughout the merry season. Wal-Mart has attempted to open stores in New York City, but we have scared them off. You can read all about it here (NYT).

Image: Drawing in pen and colored pencil of the left foot of the statue of George Washington. Federal Hall. Wall Street. November 13, 2007.

Circling the Met: A Springtime Visit to Central Park and the Metropolitan Museum of Art

April 10, 2021
For a double feature of art and nature, the Metropolitan Museum of Art happens to be conveniently situated in Central Park. The front of the museum faces Fifth Avenue, its monumental wings stretching the blocks between E. 80th and E. 84th. The sides and the back of the museum are within easy walking distance of several prominent landmarks within the park.  Cedar Hill in Central Park Before a visit to the Met, consider taking a walk around the museum beginning on the southern side. A walk in the park can serve as a good preparation for a museum visit, because looking at or noticing the shapes and colors of the built and natural environment can enhance the art experience. Cedar Hill in Central Park The path south of the 79 Street Transverse leads to a scene at Cedar Hill very much like a panorama, with a vast wide-angle expanse of green grass and hill. Take the first path that leads back over 79th Street to the southern side of the museum. This path brilliantly disguises the motor traffi
Post a Comment
Read more