Walking Off The Big Apple Contemplates Going On Strike 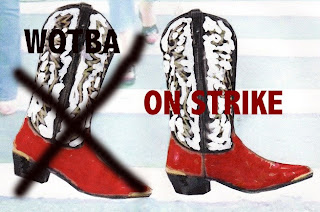 Maybe. The Writer's Guild of America is on strike, so late night TV talk shows are in reruns. The Broadway stagehands are on strike, so much of Broadway is dark. So we have much unrest among the creative classes these days in ole New York. So maybe the lone website workers like myself can just quit typing on the laptop, too. Unfortunately, I have no one to strike against or protest. I stay home wearing my fingerless gloves and developing carpal tunnel syndrome, and I have no Scrooge to blame.

"What are some of the ominous portents of a serious economic downtown in the future?," you may ask WOTBA. "And what does it have to do with The Daily Show being in reruns?"

I am glad you asked. Workers of the creative world are on strike because the distribution of wealth has once again been stacked in favor of the HAVES. The writers would like some of the money from DVD sales and the re-use of their material on websites. I don't have any DVDs, but I can attest that I have seen my own words used, and without any compensation, upon the Internet. That was back when I actually had jobs and made an income. I have become accustomed lately, to paraphrase Joni Mitchell, to write real good for free.

Today is a day of light trading on Wall Street, as it's the Veterans Day holiday. One of the underlying causes of the Great Depression in the 1930s, and its importance goes far beyond the stock market crash of 1929, was the unequal distribution of wealth. As an old friend once said to me, "I don't have anything against money. I just wish more people had some."

By the way, I read an article in today's NYT that the striking writers are still writing and publishing elsewhere, because writers need to write all the time. But what of the Broadway stagehands? Are they building stage sets in their living rooms?