The Morning News: Curtains Up on Broadway and Stocks Soar 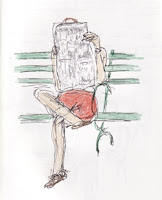 The Broadway Strike is Over: The Broadway stagehands and the League of American Theaters and Producers reached a compromise yesterday, ending the painful 19-day strike. (NYT story here.) On the other hand, the writers at CBS News look like they will take to the picket lines in December.

The Stock Market Soars: The American economy seems so pitiful that the Feds signaled that a further rate cut may be in order. (NYT story here.) Hence, the stock market posted a stunning one-day gain yesterday. Just because the market had a good day, however, doesn't mean that the American consumer had one. Consumer confidence is down, credit is harder to get, and home foreclosures are up 94% over a year ago. Sorry.

After a pipeline explosion overnight, oil prices went up, so that may make investors nervous. Traders figure that people will not spend as much on the holidays if they have to spend more cash on gas. I think people will still try to acquire items on their shopping lists, but they'll look for the cheapest price possible. The consumer economy is all about persuading the consumer that desire equals need. Do I want a new 24-inch IMac, just like the one at my friend's house? Of course! Do I need it? Er...uh...if I could see WOTBA that big on the screen, then surely I would be the most famous website witch in all of New York.

Walking Off the Wall Street Bears, now concluded as a special feature, can be viewed in its entirety in the Walks of Fame section in the sidebar.

Coming today: How Not to Blow Your Diet During the Holidays, Illustrated; New Books 2007, and Midtown Art Galleries.