The City That Sometimes Sleeps, and I Am Legend, the Movie 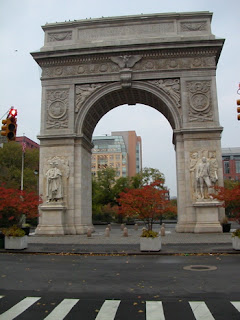 Look at this photo I took of the Washington Square Arch at 7 a.m. this morning. Do you see anyone? I don't see anyone.

I'm looking forward to the upcoming Will Smith vehicle, I Am Legend, scheduled for release on December 14. During the shooting of the production in Washington Square Park, I encountered all kinds of stretched cables, fake trees that blew around in bad weather, burned-out cars, and weird greenish lights. Fortunately, I knew it was just a movie.

The premise of I Am Legend is that the lead character, Robert Neville, a scientist played by Smith, finds himself the only person (maybe!) living in New York, immune somehow to a deadly virus in the wake of an epidemic. In the trailer of the film, we see the character trudging through the grassy High Line, driving a sports car past empty skyscrapers, and walking his likewise immune dog through the streets. As someone who lives the lonely life of a morning person in New York, with two dogs, I know exactly how he feels.

It has also dawned on me that the sparse morning population in pockets of Manhattan may also be due to the purchase of many expensive properties by people who can afford to live, and do live, elsewhere. I see a lot of windows at night in nice buildings that stay dark for months. These are investments, not homes.

Now I've started to imagine the futuristic movie, I Am WOTBA, about an aging Texas-born writer with two dogs who finds herself lonesome in an increasingly glitzy Metropolis. In the trailer of the film, my character, played by either Susan Sarandon or Geena Davis, will be shown walking around town and looking for art and pulled pork sandwiches.

Thank goodness we have so many tourists, if only for the welcome company.

The official website for I Am Legend is way cool.