Best Chance to Get Into the Whitney Biennial? Don't Turn 40 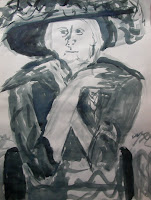 Today, the Whitney announced the artists selected for the 2008 Whitney Biennial, the much-balleyhooed survey of the state of contemporary art. I like to peruse the list, crunch the numbers, ascertain significant patterns, and then move on to something more important.

In speed-reading my way through the list announced today, I began to hallucinate the crumbling of the Nixon empire, disco inferno, the fall of Saigon, the Jonestown massacre and our nation's Bicentennial. For indeed, a little more than 50 of the 81 chosen few are little babies of the Me Generation, born during the overly colorful and raggedy late 1960s and 1970s.

Oh, to be an artist in one's 30s now and living either in New York (40 or so of them) or Los Angeles (20 or so of them), maybe even in Chicago or Miami (a smattering)! You are the favored ones! Enjoy your time in the sun. Oh, and there appears to be more artists within this age group in their early 30s as opposed to their late 30s. During one's late thirties, the knees go out, the eyes fail, the artistic juices (and more!) run dry, and the sun starts setting on one's art career. Except apparently for John Baldessari (b. 1931) and Robert Bechtle (b. 1932), sunny Californians of eternal youth.

Pack it up, Baby Boomer contemporary artists of the heartland! 40 is the new 30. Let's go play golf.

See the press release with the names of the selected artists for the Whitney Biennial at the website of the Whitney Museum of American Art.

Anonymous said…
Holy crap, how funny and true! See you at Art Basel-dan, Miami Beach
12:34 AM

March 09, 2012
This week's subject is the East River . We won't call it mighty, but we can describe it as a complicated but lovable character straight out of a classic Hollywood movie. While the Hudson River on the west tends to play a leading role, as subject of romantic landscape paintings and historic river discoveries, the East River is handed the minor part of the tough smart-talking kid. In the past few years, however, as the city revamps itself as a recreational playground, direct access to the shoreline - meaning something beyond the always exceptional walk across the Brooklyn Bridge - has received more attention in the form of improved shoreline pathways along the east and west shores and the new ferry service. It's time for the East River to land that leading role. The East River, looking north from Waterside Plaza Explore the East River from many view points, north and south - • Tentative Steps along the East River Park Promenade (East Houston to E. 10th) While t
1 comment
Read more

August 01, 2008
Over the past year I've enjoyed many occasions to visit both well-known New York attractions and several places off the beaten path. While I still have many miles to walk and many new places to discover in the course of my urban walking life, I have built up a repertory of places that I like to revisit over and over again. Sometimes, when I'm out on a walk, the kind with no predetermined ending or set path, I'll sometimes find myself drawn back to places that have resonated with me before. It's a little like comfort food, warm pumpkin cupcakes , for example, or the longing, at the end of a long vacation, to curl up on one's own bed. I like to wander out of my comfort zone much of the time, but when I feel like I need to reconnect with the city, the following places are where I feel like I can come home. This blog is titled "Walking Off the Big Apple" for several reasons. One meaning has to do with burning calories (walking off the BIG apple, walking off
Post a Comment
Read more

E. B. White and the New York of Stuart Little

August 05, 2009
(updated July 31, 2017) Of the many books that give young people their first and almost always glamorous introduction to New York City, one of the most loved is E. B. White's Stuart Little , published in 1945. Yet, while Hollywood made a n enchanting film of the classic in 1999, one that further glamorized the city adventures of Mr. and Mrs. Frederick C. Little's proper little mouse boy, the original tale is a curious story that breaks several conventions. For starters, in White's book, unlike in the movie where the Littles find him in an orphanage, Stuart is the Little's biological child (!), albeit an unusual one. He looks like a mouse, can walk within weeks after he's born, and he never gets taller than a fraction over two inches. In modern parlance we might describe Stuart as "a special needs child." He requires necessary adjustments in his domestic arrangement so he can climb up to the bathroom sink to brush his teeth. The largest problem is
2 comments
Read more