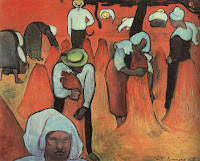 This past Saturday I visited the excellent exhibit Painted with Words: Vincent van Gogh's Letters to Émile Bernard at the Morgan Library & Museum. The exhibit is comprised of previously unseen letters and relevant paintings and drawings by both artists.

I have since lost myself in Van Gogh's letters to Theo and others. Many describe his lifelong passion for walking, from early days in England through his recovery after the famous act of self-mutilation in Arles. In one of those early letters to Theo, Vincent vividly describes a day-long walk from the countryside to London and The Strand, noting that he walked a mile in twenty minutes. That is an excellent pace, neither too fast nor too slow! (See WebExhibits for Van Gogh's letters)

Émile Bernard (1868-1941) was a flâneur's flâneur. In addition to walking all over Normandy and Brittany, Bernard was expelled from school for insubordination, frequented brothels, partied with artist friends, and escaped to Egypt for ten years to avoid the draft. Bernard's artwork influenced Paul Gauguin, but Gauguin never acknowledged this.

I have my doubts, too, about Gauguin after reading a fascinating article, Drama at Arles: New Light on Van Gogh's Self Mutilation, by Martin Bailey (Apollo, September 2005).