"The Pain Threshold," Or, Maintaining Dignity with Our Euro-spending Friends 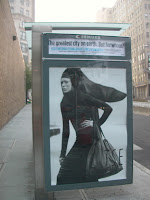 Or, alternative post title: "Who's Wearing the Fingerless Gloves Now?"

New Yorkers know only too well that it's expensive to live here. According to the latest census numbers, large numbers of New Yorkers shell out a large percentage of their income for mortgage or rent. Other dollars go to the utility company, the cable company, mass transit, and to caffe lattes grandes. That leaves precious little for a movie and brunch.

With the dollar now so deflated in relationship to the euro, New Yorkers have to work hard to maintain dignity with their euro-rich friends visiting from overseas. Vacationing friends will disappear for a spree in SoHo and bring home a bounty of goods to show off. "And it's all so cheap," they say. Or, I'll go out for a nice dinner with visiting friends, and while I'm looking for the thing on the appetizer part of the menu that's under $12 dollars, the friends will say, "And it's all so cheap!"

The weak dollar means that Americans will think twice about visiting Europe and also limit purchases of European goods. At some point, European companies arrive at "the pain threshold," and there comes a knocking at the door. Many articles in the business pages, such as this one, indicate the threshold has already been breached. It could get worse, though, and someone's hand could get caught in the door after it's open and then slammed back shut.

U.S. officials don't mind, because a weak dollar eases the trade deficit. It's kinda pitiful, if you ask me.

A Walk in the Forest Primeval

May 19, 2020
Contemplating the fall of civilizations in Inwood Hill Park At times, it feels like we’re living at the end of civilization. With the arrival of the global pandemic, many governing structures are teetering at a breaking point, one measured in graphs, curves, and waves. Whole systems like mass transit and global trade are fractured as well. Steps leading to a high ridge trail in Inwood Hill Park Most threatened are our social arrangements, the ones in which most of us were socialized. The norms of human interaction are shockingly in tatters these days. Just three months ago, it was normal to hang out with others in person without worrying if being in one another’s presence would cause illness or possibly death. Political and economic structures are teetering, with a critical collapse of what was once known as the public space. A Baltimore Oriole visits a tree near the main entrance of Inwood Hill Park on Seaman Avenue. It’s easy to imagine a swift evacuation of once pr
Read more