The Cloisters: The Unicorn Tapestries and Their Provenance 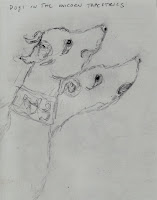 Much of the world's greatest visual art hangs in private residences, inaccessible to public view. Anonymous buyers at the world's auction houses squirrel away great treasures at the close of the sale, wonderful works of art only to be viewed by close friends and family. Even Walking Off the Big Apple possesses a great treasure trove of art in her home, including humble vernacular items of the American South, highly skilled paintings and drawings of formally trained artists in academia, and even a page from a 13th century music manuscript that makes her feel like a Morgan. This last work is so private that it's stashed under a stack of blankets in the linen closet, and I forget it's even there.

From 1922 until 1937 the Hunt of the Unicorn Tapestries, arguably the most exquisite objects of their era, dating from 1495 to 1505, adorned the private residence of John D. Rockefeller, Jr. Prior to his acquisition, the tapestries belonged to the Rochefoucaud family in France, but in the late 18th century French revolutionaries liberated the family of the tapestries. In 1850 the Count de la Rochefoucauld decided he wanted his family's stuff back. The count bought the tapestries from a peasant woman who said she was using some curtains with unicorns on them to cover her vegetables. Rockefeller eventually acquired all seven of these useful tapestries, and in 1937 he presented them to the Metropolitan Museum of Art for all the world to see.

The Hunt of the Unicorn Tapestries, newly restored, now hang in a darkened room at The Cloisters, and if you go on a Sunday morning when the museum opens at 9:30 a.m. (shhh, few know about this, I think) you may be lucky enough, as I was, to have them all to yourself.

For a fascinating look at the restoration of the tapestries, please read Capturing the Unicorn: How two mathematicians came to the aid of the Met. by Richard Preston from the April 11, 2005 issue of The New Yorker.