The Cloisters: A Quick Overview 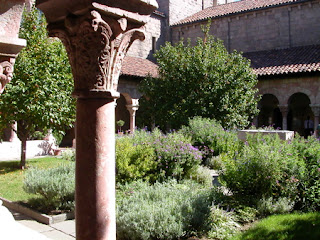 During the Middle Ages, aggressive and illiterate 20-year-olds in bad health crowded the cobblestone streets, much like the (Goth)am of our own time. The 20-somethings of today may be taller and cleaner, but to their credit, the brutish, nasty and short Goth counterparts of the 13th and 14th centuries kept themselves busy as farmers and craftsmen and did not lounge around the Village eating brunch. Medieval village dwellers had little in common with the crusading orders, busybodies who lacked humor and were obsessed with recapturing the Middle East from Muslim rule.

Like our own era, medieval European artisans made visual art with the intent of frightening people. Monstrous visions of damnation, carved upon columns, pedestals, and church doors, could spook more people than your average Andres Serrano photograph. Thanks to the French revolutionaries of the 18th century who let their monasteries go down hill and to the restoration zeal of "Junior "(image above: John D. Rockefeller, Jr.), we can all closely examine the scary art of the Middle Ages by jumping aboard the A train.

Clear skies and mild temperatures lured many visitors to The Cloisters yesterday. I overheard a few native New Yorkers confess that it was their first time there. "Who can believe such a place is in New York? Such a gem!," they said. Visitors from France arrived in large numbers, snapping photos of Clovis, Clothar, and Cluny. Given the current euro-to-dollar exchange rate, France could buy the whole place back. Short of that, the Met's gift shop can expect record pre-holiday sales.

WOTBA cannot possibly explain medieval life and The Cloisters in one post. Check back later for highlights and original drawings.

Anonymous said…
No need to go to Vermont or even upstate. In Oct - some of the greatest Fall Foliage in the area is in the Cloisters.

Here is a description of Fall Foliage around New York City.