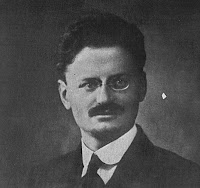 Leon Trotsky lived with his family in New York for two months in 1917. In his autobiography, the revolutionary tells a charming anecdote about his younger son*:

When I telephoned my wife from the newspaper office that Petrograd was in the midst of revolution, the younger boy was in bed with diphtheria. He was nine years old, but he realized definitely – and had for a long time – that revolution meant an amnesty, a return to Russia and a thousand other blessings. He jumped to his feet and danced on the bed in honor of the revolution. It was a sign of his recovery.

We were anxious to leave by the first boat. I rushed from consulate to consulate for papers and visas. On the eve of our departure the doctor allowed the convalescent boy to go out for a walk. My wife let him go for half an hour, and began to pack. How many times she had gone through that same operation? But there was no sign of the boy. I was at the office. Three anxious hours; then came a telephone-call to my wife. First, an unfamiliar masculine voice, and then Seryozha’s voice:

“I am here.” “Here” meant a police station at the other end of New York. The boy had taken advantage of his first walk to settle a question that had been worrying him for a long time:

Was there really a First Street? (We lived on 164th Street, if I am not mistaken.) But he had lost his way, had begun to make inquiries, and was taken to the police station. Fortunately he remembered our telephone number.(For the full account of Trotsky's two months in NY see Leon Trotsky. My Life. 1930. Chapter XX. New York )

*Trotsky's son, Sergei Sedov (1908-1937), an apolitical engineer, was arrested and shot during the Stalinist purges.