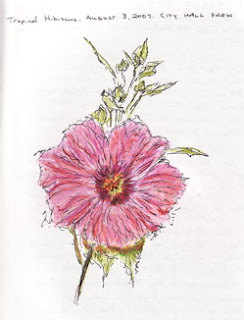 Maybe tropical flowers enjoy the Air Quality Alerts we have here from time to time. Realizing that NYC would be hot and humid today, I took my morning walk early, starting out a little before 8 a.m. and heading south on Broadway.
The walk began along a fashionable section of Broadway in SoHo but gradually gave way to more prosaic stores lining the street.
I often gravitate downtown, stopping many times in City Hall Park. A small serene pocket of seasonal plants and flowers, the park sits amidst one of the more graceful skyscraper jungles. Sitting on a bench near the fountain affords views of the Woolworth Building, City Hall, and the old Tammany Hall.
City Hall is also the access point for the Brooklyn Bridge, so the park is the optimal place to decide whether one wants to continue south toward the Battery or head east, across the bridge and over to either DUMBO (Down Under the Manhattan Bridge Overpass) or Brooklyn Heights.
After resting and drawing, I walked over to the WTC site and then headed north on Church St. and through Tribeca toward home. The entire walk downtown and back took close to an hour, but I broke it up into two manageable sections.