Towards a New Amsterdam: Celebrations of Henry Hudson's Voyages to the New World for the Dutch East India Company 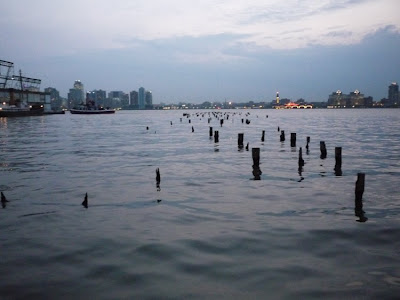 (Ed. note: Consult the post from September 10, 2009 for additional listings.)

In 1609 Londoner Henry Hudson, hired by the Dutch East India Company to find an easy passage to China, sailed his ship, the Halve Maen, into New York Harbor and then up what is now known as the Hudson River. With no China in sight, he had to turn back. Hudson's 3rd voyage allowed the Dutch to claim the region and to establish fur trading. The rest is history.

"Sept. 12, 1609. Very fair and hot. In the afternoon at two o'clock we weighed, the wind being variable, between the north and the north-west; so we turned into the river two leagues and anchored. This morning at our first rode in the river, there came eight and twenty canoes full of men, women and children to betray us; but we saw their intent, and suffered none of them to come aboard us. At twelve o'clock they departed. They brought with them oysters and beans, whereof we bought some. They have great tobacco pipes of yellow copper, and pots of earth to dress their meat in. It floweth south-east by south within. - Robert Juet, crewman aboard the Halve Moon, Henry Hudson's Third Voyage to the New World."

400 years have passed since these moments, and New York and Amsterdam are celebrating all year. The culmination of the celebration will take place in September, but many special events and exhibitions are ongoing. Explore more at these websites:

• Henry Hudson 400: Celebrating the history of Hudson, Amsterdam, and New York.
Download their walking tour of 17th Century Dutch New York, the New Amsterdam Trail, for a self-guided tour of sites in lower Manhattan.
• NY400 Events: Holland on the Hudson
Note: NewYorkology has the skinny on the flotilla this weekend.
• New Netherland Museum and Half Moon

Coming up this weekend on WOTBA: A review of the video installations of Aernout Mik at MoMA. If you're wondering, the artist is Dutch, born in 1962.