Mapping Out the Tribeca Film Festival 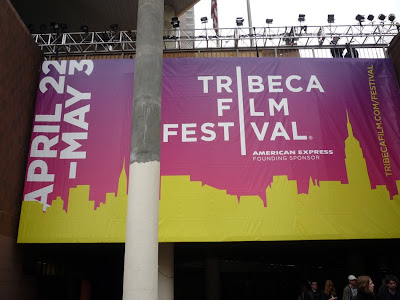 The first question someone asked me yesterday during the course of covering the first full day of this year's Tribeca Film Festival was where to get good Italian food near Union Square. Thousands of film writers, producers, and directors have converged in lower Manhattan for the festival, now through May 3, and between premieres, they're looking for a good but quick place to eat. I do my best to help, but I'm one of those types that has a hard time deciding on restaurants. When I make suggestions, I often get in trouble. While I love beautiful restaurants with accomplished chefs and well-appointed rooms, I often have low-brow cravings that lead me to other places. So, for example, when I offer a suggestion about a diner that serves good tater tots, someone may roll their eyes and think of a place with more refined fare.

Back to the subject of the film festival, my questions now usually involve the issues of getting from here to there. As I'm starting to write about the films for my blog titled Shoe Leather on the Tribeca Film Institute's Reframe site, I realize that I'll indeed be wearing down a lot of shoe leather over the next several days. How do I get from AMC Village VII (3rd Avenue) for one movie and then to the SVA (33 W. 23rd) for another soon after the first has ended? And, what's the most pleasant route from the AMC theater to Tribeca? Should subways be involved?

To answer these questions, I have made a map listing the venues of the Tribeca Film Festival and hope that it's of some help for festival filmgoers. As the Google map is interactive and you're looking to eat, feel free to select a venue, zoom in and type in a search for the nearest nicest restaurant with your preferred cuisine. As for getting around, walking may be the most efficient way to get from one venue to another.

By the way, I recommend Trailer Park Lounge at 271 W. 23rd St., a half block away from the SVA Theater, for really good tater tots.

See my earlier post on New York-themed films in this year's festival.

For a philosophical approach to film venues in a digital age, please read my latest post on Reframe titled The Tribeca Film Festival and Reframe: Screens Big and Small.

Image: Tribeca Film Festival banner on the west side of the BMCC PAC, Chambers Street and West Side Highway.