March 07, 2009
Continuing a look at walking arcades, please find below a couple of images of two walking passages near Times Square - Minskoff Alley and the famous Shubert Alley. Not far from the arcades in Midtown in the fifties, these alley passages show off the visuals of the area's theatrical culture. The Minskoff Theatre, opened in 1973, was refurbished for its long-running hit, The Lion King, the musical that arrived here in 2006 after playing at the New Amsterdam Theatre since its debut in 1997. The alley runs from 44th to 45th. The theatre itself is located in a tall office building, One Astor Plaza. 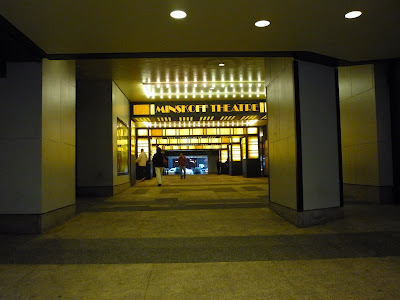 The older Shubert Alley runs between 44th and 45th, connecting the Booth and the Shubert Theatres and the back of the Minskoff Theatre. In 1975, A Chorus Line opened at the Shubert for an astonishing fifteen-year run. The theatre, opened in 1913, sports a decorated Venetian Renaissance exterior designed by architect Henry Beaumont Herts (also of the similar Booth Theatre). The auditorium and murals were remodeled in 1996. A shop, One Shubert Alley, is popular with Broadway fans. 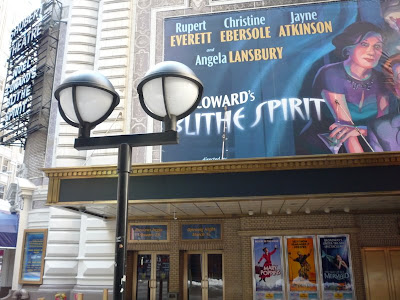 The revival of Noel Coward's Blithe Spirit is currently in previews and opens March 15. The cast includes Christine Ebersole, Rupert Everett, Jayne Atkinson (actually, you can glean this information from the photo above) and the immortal (well, she may be) Angela Lansbury.

Walking through Shubert Alley leads to W. 44th and immediately to several more famous destinations in the Theater District - Sardi's, the Helen Hayes Theatre, and the St. James Theater. 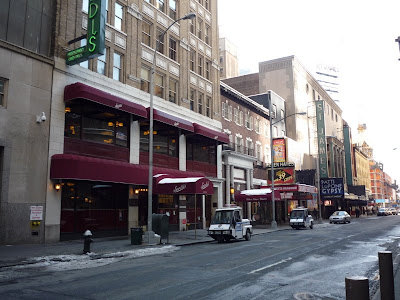 As the city planners think about ways to take automobiles off blocks of Broadway, it would be advantageous to find opportunities to incorporate more walking arcades and alleys into the Theater District and in other parts of the city.

For much more on the theatres of Broadway, see this related post.
Images by Walking Off the Big Apple. March 5, 2009.