On New York Street Corners and Elsewhere: President-Elect Gifts for the Holidays 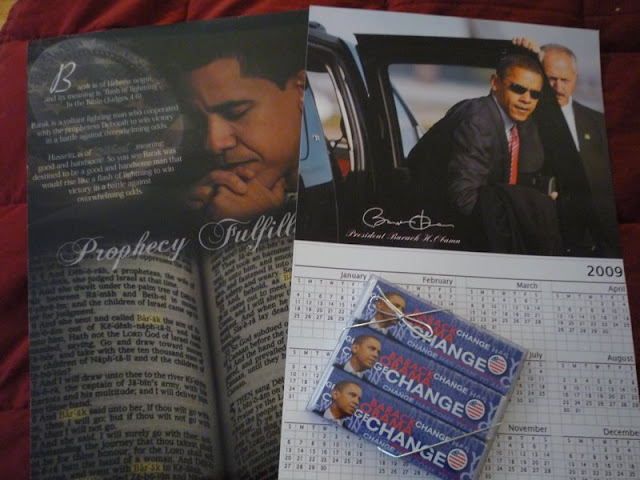 I'm enjoying the Obama-related merchandise on the streets this season, and I've had to restrain myself not to buy a whole lot of it. Many of the items for sale that feature the President-elect can be found on street corners by individuals who have also designed them and are enthusiastic fans.

I was completely taken with the cool Obama calendar depicted here on the right, because the senator looks so movie-star cool and BAD. Look at him! He's full of action, stepping out of the car. He's on it. He looks like a secret agent man!

I bought this calendar, as well as the one illustrating Obama's prophetic rise to power (on the left), from a guy with a table on a corner near Astor Place. He had several more posters for sale, including the incoming First Family in a holiday picture. I really had a hard time deciding.

Yesterday, while shopping at Macy's, I found these Obama-themed chocolate bars, and I'll be slipping these into stockings on Christmas Eve. Of course, it's best to give these types of presents to people who actually voted for Obama. I'm keeping the calendar for myself.