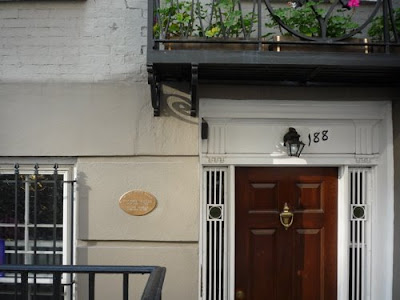 Edgard Varèse (1883-1965), a French-born composer, moved into a house on Sullivan Street in Greenwich Village with his wife Louise in 1925. He became an American citizen the following year. While he was alive, people strolling by the townhouse must have been struck by the frightful sounds emanating from the basement. The timbres and rhythms from strange and unearthly instruments seemed like something out of a horror movie. The composer was not unfamiliar with the genre. He played a bit role in the 1920 film version of Dr. Jekyll and Mr. Hyde, the one starring John Barrymore.

The music Varèse created challenged the existing paradigm of composition. "Organized sound," as he called it, grouped rhythms and timbres with others of similar qualities. He said he was not a musician but a "worker in rhythms, frequencies and intensities." In the 1910s he started exploring the idea of music made with electronic instruments, but many people found his ideas too unconventional. It took many years before his experiments were accepted. He designed his Poème Électronique (1958, link to documents and clip at Columbia University), made for the Brussels World's Fair, to be played through an array of 400 loud speakers as part of a large multi-media installation (directed by Le Corbusier).

Fans of Frank Zappa know of Varèse because Zappa idealized him and inspired his own course in avant-garde composition. See Zappa Wiki Jawaki link for Zappa's essay, "Edgard Varèse: The Idol of My Youth," originally published in Stereo Review, June 1971. In the essay Zappa explains how he always wanted to meet his idol at the composer's home in Greenwich Village, but the meeting never came to pass.

Varèse lived in the house on Sullivan Street until his death in 1965. His wife Louise lived there until 1987. According to her obituary in The New York Times, Louise was a translator of French literature, winning an award for her translation of Baudelaire's ''Paris Spleen.'' She also wrote a biography of her husband.

Image of the home of Edgard And Louise Varèse, 188 Sullivan Street, by Walking Off the Big Apple.