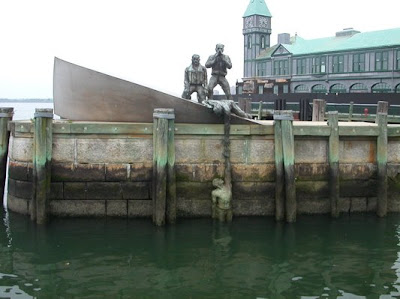 Among the many sculptures and memorials that line Battery Park and Battery Park City, several invite closer inspection, description and analysis. The American Merchant Mariners' Memorial, just to the south of Pier A in Battery Park, is one such example.

Here, sculptor Marisol Escobar, one of the most significant artists of the Pop era and a long-time resident of Lower Manhattan, depicts merchant marines on a sinking lifeboat. Inspired by a photograph that showed the victims of a U boat attack on an American tanker, the 1991 memorial is dedicated to all of the American merchant mariners from the Revolutionary war to the present. The names of 6700 merchant seamen lost at sea in WWI and WWII are inscribed in the boat's interior.

At top a mariner kneels and stares forward while another braces his footing on the capsizing boat while crying out for help. Just below, a crewman lies down to get into position in order to rescue their shipmate who has fallen into the water. Half submerged, the fallen mariner looks up and reaches for his mate's hand. The position of the mariner in the water, subject to the tides of the harbor, provides emotional drama. The space between the arm of the figure above and the one below is extraordinarily tense, resonating with potential rescue or possible loss. Over time, 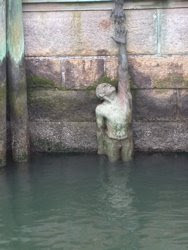 weather and seawater have coated the figures with a verdigris patina, further blending the merchant mariners, and the memorial to their loss, with the sea.

Marisol is most known for her box-like figurative sculptures from the 1960s that often satirize social conventions, especially the family. In the 1950s she studied with painter Hans Hoffman, a mentor for the Abstract Expressionists, but she came to be associated with the Pop Art movement and its stars, including Andy Warhol. So the Mariners' memorial comes as a surprise in the context of her other work, as the figures bear a relationship to more realistic sculptural traditions.