Walking Off the Lower East Side: Hester Street - The Slow Fade to Shade

Crossing Delancey, I walked south on Essex to Hester Street, a short thoroughfare that became one of the important centers for the Jewish immigrant community in the Lower East Side a century ago. Fading as a center of Jewish life, the area around Hester now blends the mixed multicultural heritage of many cultures, including Chinese and Yuppie. Gertel's Bakery, a longtime favorite for rugelach, closed at 53 Hester in 2007, a departure that signaled for many another stake in the heart of old New York. In its stead is a planned 12-story residential structure, once again controversial in its scale. Down the street is a cafe named "brown" (its very subtlety of name reads "gentrifying presence of the post-grad academic") that I decided not to hate, if only because the coffee was good and everyone in there reminded me of myself.

Now, along Hester Street, as opposed to 100 years ago, there are trees. It took me a while to realize that the sudden softened appearance of the street, and its immediate attraction, came from these tallish green 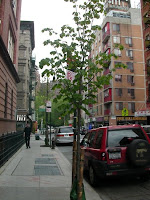 things, these living entities that provide shade, sprout limbs, and clean the air. The Lower East Side was never famous for its greenery, but for its rugelach and immigrant heritage. I was nevertheless struck by the leafy saplings and what they can do for a landscape. Planted under the auspices of the city's public-private Million Trees NYC project (vaguely Maoist-sounding to me, Mayor Bloomberg's Let a Million Trees Bloom), the greenery ties Hester Street aesthetically to Seward Park on the east and to the social reform heritage of parks as refuge from the dangers of the street.

The Google map includes streets I've visited in this series on walking the Lower East Side and ones I've yet to discuss. The map is in progress.