Walking Off the Lower East Side: Essex & Delancey, Ludlow & Broome 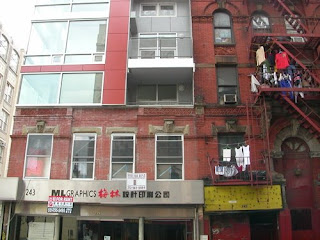 I walked deep, deep, deep into the Lower East Side today, the second of two long walks. This morning I set out to the neighborhood from my place in Greenwich Village, strolling east on Bleecker, then south on Bowery to E. Houston, east one block past the Whole Foods Market, and then south on Chrystie. I crossed over the park to Rivington, stopped at the University Settlement at the corner of Rivington and Eldridge, pulled my camera out of my bag to take a picture and nothing happened. I left the battery in its recharger at home. Bummer. I really wanted to take pictures today. I lowered my head and walked home.

Later today, I decided to take the F train to Delancey and then walk around from there. Emerging from the subway at Essex and Delancey, I beheld the scene you see to the left - the Essex Street Market and corner pizza place at the bottom and the condo development known as Blue rearing its irregular geometries in the background. Here's the Lower East Side in a nutshell - the markets that became the home in the 1940s for the old push cart peddlers (if you're hungry, or just because, you need to go inside), and with it, the corner pizza place, and behind it this pricey blue glass highrise that looks like something I once built in Sim City. This, my friends, is the face of contemporary New York, the latest chapter in a long story of outdated zoning laws in an historical neighborhood on one of the richest islands in the world.

It was not the only story of change-before-your-very-eyes I would see today. Every block, it seems, tells the story in some little vignette - an historic business tenaciously holding onto the old neighborhood but next door to one that's closed, or a new fill-in development that promises state-of-the-art features but shares the same wall with an older building whose residents dry their clothes on the fire escape outside.

There's much more ahead. I haven't gone that deep yet. From here I walked down to Hester Street and then over to Seward Park, then down East Broadway (drawn by a building there), over to Henry Street, and then back to Seward Park. This series of walks on the Lower East Side may take a few more days than I had originally planned. I think it's worth it.