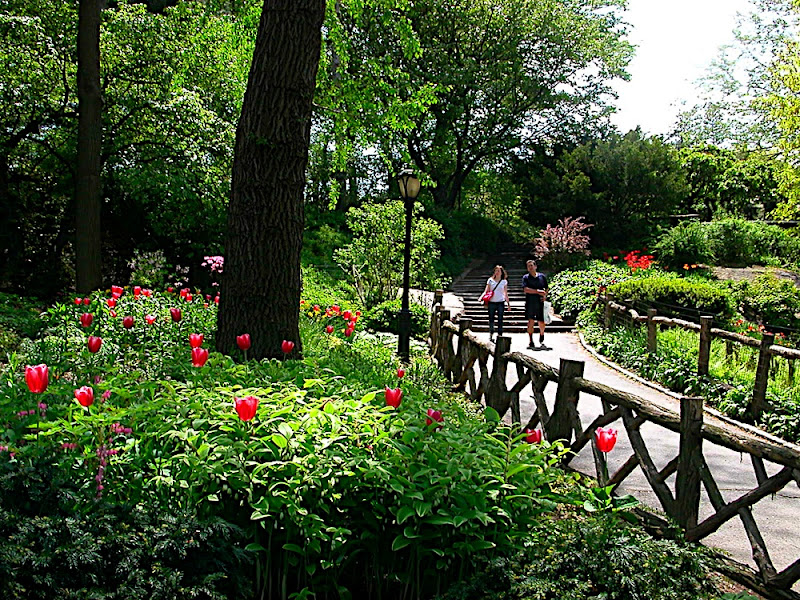 If you're in New York right now and you need to do some work online and you can leave the office, check out this place. I'm in the Shakespeare Garden, just up the steps from the location of this picture. Belvedere Castle is to my right and up another small flight of stairs. The Delacorte Theatre, home to the New York Public Theater Shakespeare in the Park, is just to my north, and is the source of this Wifi signal. I'm sitting on a bench made out of tree limbs.

Today's plan is to hang out here, catch up on emails, make notes about films, and then wander around The Ramble, take pictures inside The Ramble (I'll explain later), and then walk east and north through Cedar Hill to the Met. I don't plan on seeing any art today, but I may go to the museum cafeteria for mid-afternoon tea.

Before I forget, and as I'm at the Delacorte, check out the plays for Shakespeare in the Park this summer:

Hamlet by William Shakespeare
May 27-June 29

Anonymous said…
After our walk through the Ramble we headed toward Belvedere Castle. After spending time looking out from the castle we came across Shakespeare Garden and also sat on a bench made out of tree limbs for a long time. It was a perfect spot to rest since we started from Grand Army Plaza and heading for the American Museum of Natural History. It made us realize you could spend many months exploring all of what Central Park has to offer.
9:17 PM