A New York Giants Mardi Gras: Awash in a Sea of True Blue 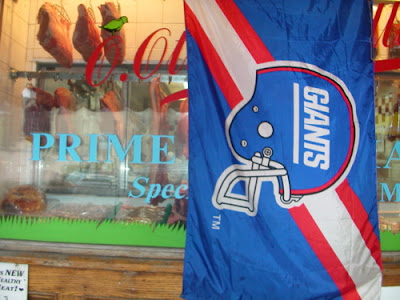 After voting in the late morning I spent an hour walking west on Bleecker Street and then up and east over to Astor Place. I expected to see plenty of people out and about carrying 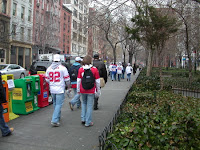 I did see the New York Giants fans out in full force, dispersing from downtown's parade in the Canyon of Heroes. Several Giants fans wore both the team jersey and Mardi Gras beads, but I kept hoping to see one that wore a NY Giants shirt, some carnival beads, and an Obama button. Maybe I just missed that person. 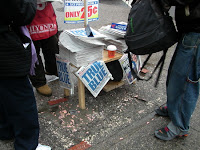 It's Fashion Week in New York, but it's hard to see that, too. Only True Blue looked fashionable on a day like today.

Images: top, the window of Ottomanelli's Meat Market, 285 Bleecker St.; Giants fans, in their lucky "away" colors, along LaGuardia Place; selling the tabloids at Astor Place.