The Girl With The Purple Umbrella 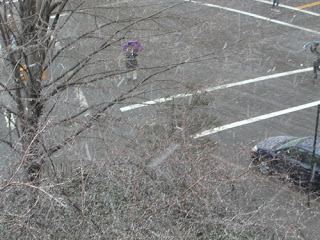 After a forecast yesterday that called for rain or snow in the morning, followed by a chance of flurries or some rain later in the morning, and then some rain around noon, nothing really materialized until the early afternoon. Then, a wild but brief sideways snowstorm blew in fast and furious. It was not like fluffy snow or freezing precipitation but more like being caught inside a shaken snow globe.

I chanced to look out the window at the blowing wintry precipitation - the kind that the weather service might characterize as "unknown," when I spotted a young woman with a purple umbrella standing in the middle of the intersection. I didn't think she was in too much danger, Sunday afternoon at that hour is fairly quiet in the Village, but I did worry that she was fairly vulnerable to a speeding taxi. As we say in Texas, usually about politics, "Only thing in the middle of the road are yellow stripes and dead armadillos."

I watched her for several minutes, though she was hard to see in the blowing snow, and I wondered why, of course, she was immovable in the middle of the intersection. I liked her purple umbrella. Then I realized she was talking on her cell phone. That must be a pretty important call, I thought, the kind that's so important that you have to stand still. Casual phone calls usually can be conducted while walking, but serious or surprising news will stop you dead in your tracks. So, here's this girl with a purple umbrella that's about to blow out of one hand, and it's snowing sideways at about fifty miles an hour, and she's on the phone and not moving. I would not do that.

I surmised that even though I saw her standing at this particular intersection in the middle of a winter storm, she herself imagined being elsewhere, a somewhere that was not in the middle of the street.