FOCUS on POTUS: The Two Washingtons of the Washington Square Arch 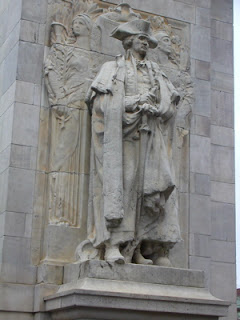 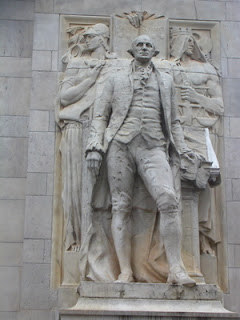 Officially, it's still called Washington's Birthday, though Presidents' Day has become the accepted name, mostly as a way to include President Lincoln.

The day's meaning usually signifies a break from work or school or the arrival of a sale. In the United States Senate, however, there's at least one formality. One senator is selected to read Washington's Farewell Address. The practice began in 1862 as a way to cope with the dark days of the Civil War.

This morning I visited the statues of the two Washingtons - the military George and the civilian man of peace that grace the north side of the Washington Square Arch in Washington Square Park. Sadly, in the ever-increasing disruption caused by the renovation of the park, the arch itself is now inaccessible behind a metal fence.

The arch served to commemorate the Centennial of Washington's Inauguration, an event that took place downtown. The pier statues were added later -"Washington at War" on the left of the arch by Herman MacNeil in 1916 and "Washington at Peace" on the right by Alexander Stirling Calder in 1918. Yes, Calder was the father of the famous mobile artist, Alexander Calder.

While it's not surprising that two different sculptors should interpret Washington differently, especially given the separate tasks, I'm struck how the civilian Washington, the one by Calder, presents the tougher image. While MacNeil's warrior George seems to retreat behind all those formal clothes and hat, Calder's peacetime George is bold and struttin' his stuff. Casually resting his left hand on the pedestal, his massive strong right hand shows off serious knuckles. This POTUS has got some legs, and I'd be afraid of that extra muscle he's got behind him.

Images of "Washington at War" by Herman MacNeil (1916) and "Washington at Peace" by Alexander Stirling Calder (1918) by Walking Off the Big Apple, February 18, 2008, Washington's Birthday.