"Opium-Eating is Not Congenial to Walking," Says Virginia Woolf's Father 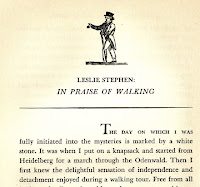 Thumbing through my vintage walking books and reading descriptions of the routine perambulations of the most famous writers in literature, I hang my head in shame over how little I walk. Essays about walking published prior to our own era make note of standard daily walks in the twenty-to-thirty mile range, far longer than the 10,000 steps or five miles recommended these days.

Leslie Stephen, the father of Virginia Woolf and a walking enthusiast, wrote an essay "In Praise of Walking" describing the relationship of walking to the development of English literature. He writes, "The literary movement at the end of the eighteenth century was obviously due in great part, if not mainly to the renewed practice of walking." He cites William Wordsworth's walks in the Lakes and the Alps and Thomas De Quincey's daily ten miles. Samuel Taylor Coleridge, though consumed by bad habits, could walk farther than most avid walkers today:

"Opium-eating is not congenial to walking, yet even Coleridge, after beginning the habit, speaks of walking forty miles a day in Scotland, and as well all know, the great manifesto of the new school of poetry, the "Lyrical Ballads," was suggested by the famous walk with Wordsworth, when the first stanzas of the 'Ancient Mariner' were composed."

Stephen argues that all the great writers, with some exception, were "enthusiastic walkers." The greater the distance the more capable the writer, Stephen asserts, comparing the accomplishments of the lame Sir Walter Scott, who walked twenty and thirty miles a day, to the morbid obsessions of Lord Byron, a couch potato.