Walking Off the Wall Street Bears: My Fundamentals Are Deteriorating and My Personal Expectation Index is Partly Cloudy 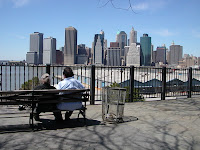 I have recently started reading the business sections of newspapers and online news sites every single day. This is a startling turn of developments, and I have just come to understand why.

Before I lived in New York, I rarely read the business section of a newspaper, I think, because I could take the pulse of the economy just by looking around. In a time when I actually owned a vehicle and a single-family house, I could easily visualize downturns and upswings in the economy by driving my car through neighborhoods and to stores. I could see how quickly the SOLD signs appeared on houses on the market, and I could watch new activity, or lack thereof, in new home construction. The health of the housing market could be quickly assessed by the length of the line at the cash registers at Lowe's or Home Depot.

I could often extrapolate how other middle class energy consumers like myself reacted when I filled the gas tank of my car. When I lived in Texas or the Upper Midwest or the Deep South, I would occasionally pop into Wal-Mart in order to save money on dog food, craft supplies, allergy medicine, a T-shirt, a bottle of wine, a string of chili pepper lights, and some tamales all at once.

That was then. Now is now, and walking down Wall Street, as I pass the Bank of New York, the Stock Exchange, the House of Morgan, Federal Hall, the new branch of Tiffany's, new multi-million dollar condominiums, and offices for investment bankers, I realize nothing bears physical resemblance to the visual culture of the average American consumer, except for the Downtown Pharmacy and Starbucks. Maybe at this last place, a so-called "third place," I can put down the newspaper and forecast the economy just by reading the coffee grounds.