March 29, 2016
Visitors who have enjoyed strolling through the Onassis Cultural Center, a hidden modern gem of ancient civilization in midtown Manhattan, will be glad to hear that the galleries are back open. After the renovation and expansion of the downstairs rooms at 645 Fifth Avenue, the Onassis Foundation is celebrating the opening with an exhibition, Gods and Mortals at Olympus: Ancient Dion, City of Zeus. The center has scheduled an ambitious set of family programs, online resources, and even a digital game in conjunction with the exhibition. It's rare to see such exquisite classical works outside of a major museum.


Gods and Mortals, curated by Dimitrios Pandermalis, president of the Acropolis Museum and director of the excavations at Dion since 1973, includes a selection of rare artifacts as well as multimedia documentation of their extraordinary context within the landscape of Mount Olympus. While museum-goers most often view classical statuary, mosaics, and everyday objects as artifacts devoid of context, Gods and Mortals provides the opportunity to understand not only the changing historical world of ancient Greece but also the living, breathing landscape of these discoveries. It looks like a gorgeous place.


Ancient Dion, as a sacred site, was an extraordinarily diverse city with multiple historical layers of deity worship from Hellenistic and Roman times and with influences from Egyptian culture. A panel of mosaics showing Dionysus and accompanying masks testify to the city's rich theatrical legacy. From the Roman period, marble sculptures of philosophers installed in Dion's public baths reveal enduring Greek traditions of discourse. The exhibition focuses on the period of Macedonian rule (ca. 413-167 BC) and the Roman period (first to third century AD). The dramatic setting of the city in the foothills of Mount Olympus certainly suited the political needs of Alexander the Great. Ever since excavations began at the site in 1928, new episodes in the city of Zeus have been revealed.


The videos that play in a multimedia gallery, along with recordings of bird calls and other ambient sounds in the galleries, help establish the context for the lush and green city of Dion and the specific location for many of the objects on display. The videos also show the work of the archeological team in removing and conserving the objects. The rare objects on display have never been seen in the U.S. A visit to the center on Fifth Avenue invites a discussion about the origins of the modern world and how a major city both changes and endures over the course of a thousand years. 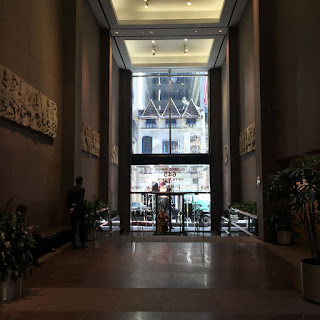 The exhibition, free and open to the public, is accompanied by public programs, online resources, and a game app.
Visitor information: www.onassisusa.org